BedRock is a high-energy, TRIBUTE to 80's / 90's Rock that brings THE ULTIMATE HAIR BAND EXPERIENCE to venues across the sunshine state, performing all the fun tunes that everyone knows and loves plus a few surprises thrown in to make it one big party! Audiences are constantly kept on their feet, happy to hear their favorite rock tunes that bring them back to when music was about having fun. There are no wigs or gimmicks here - just everyone’s favorite 80’s / 90’s rock tunes played right! The band is based out of Jacksonville, FL and consists of all pro musicians - most of whom have extensive stage and touring experience across the US and beyond. The entire band delivers a high-energy performance, ensuring a great time is had by all - they never disappoint, are well-received wherever they perform, and are always happily asked back! BedRock plays shows throughout Florida, year-round, and is available to perform at any number of events - opening for national acts, at festivals, county fairs, casinos, country clubs, charity functions, birthdays, corporate events, private parties, weddings - pretty much any event - just ask to see if they are able to play your function. For more info or to find out how to book BedRock, contact their manager / management company, Chrissy at Twisted Entertainment: Twisteden@aol.com.

This 14-year old vocal sensation hails from New Paltz, NY and joins BedRock from her 4-year position as lead vocalist of the Hudson Valley classic rock cover band, Ashes of the Phoenix, since it began in 2014. From a very young age Tess began participating in local theatre, quickly transitioning to singing at local open mic nights, and then to rock band workshops via New Paltz Rock. Tess has extensively performed with Ashes of the Phoenix (formally a New Paltz Rock band) at venues such as The Chance Theater, Orange County Choppers Cafe, the Taste of New Paltz, and many more. Tess has attended the Paul Green Rock Academy (PGRA) since age 10 to pursue not only singing but also guitar, performing with its show band at events in Woodstock, at venues throughout the year, two Summer tours, then in 2017 a Summer tour with the Gene Ween Does Billy Joel show as the opening act. Performances included venues such as The Queen (Wilmington, DE), The SPACE at Westbury (Westbury, NY), Daryl's House (Pawling, NY), etc. In June of 2017, Tess was honored to sing as a back-up vocalist for special guest, Donald Fagan, at a Best of Season PGRA event. In November 2018, Tess concluded a 9-week Idol vocal competition in Westchester, taking 2nd place overall among 18 other contestants. Machan Taylor, renowned vocalist, recording artist, performer, composer and educator has been providing vocal instruction to Tess regularly since 2015. Tess has been inspired by artists and bands such as Guns N Roses, the Police, Van Halen, Aerosmith, Pink Floyd, Led Zeppelin, and much more. She is interested in all music types and genres, from classic hard rock, blues and soul, and metal.

Originally from Los Angeles, CA, Maggie was given the gift of music appreciation in elementary school. Playing violin then later singing in choir her appreciation of music consumed her world. She feels fortunate to have enjoyed some of the greatest decades in music and her eclectic taste in music includes Pink Floyd, Pantera, Jimmy Hendrix, The Eagles, Aretha Franklin, Bad Company, Metallica, Johnny Cash, Eric Clapton, Bonnie Raitt and the greatest Philharmonic Orchestras from around the globe! Classical music just takes your imagination places. After moving to San Jose -The Bay Area, Maggie was given the opportunity to perform in Musical Theater. 10 wonderful years of working with some of the Best Musical directors and vocal directors the Bay Area had to offer. As an alto, she was able to enjoy several principal roles..... sometimes without a microphone and learned the art of projection!Those years in theater would introduce a Friendship that would carry her through to the world of Rock n Roll! So off she went with Gal Pal Lisa. Four bands later and a move to Jacksonville Maggie is absolutely Excited, Honored and thrilled to have this latest opportunity to join BedRock! Maggie's performance style Puts you, the audience First. "I am here for One Reason..to make sure our audience cries out for More! Maggie thanks her many muses throughout her life for the tools they provided leading up to this very moment in life. LONG LIVE ROCK N ROLL! 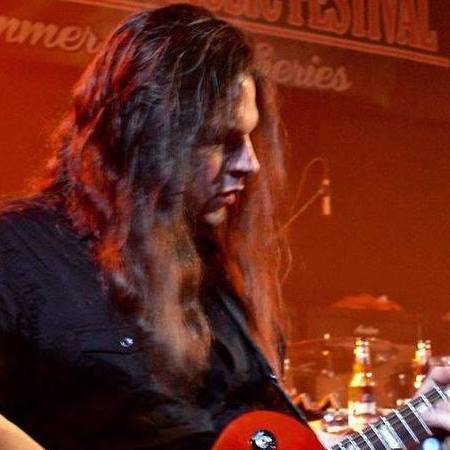 Gary Cellucci grew up in Troy, NY. At a young age, the discovery of the rock band KISS led to a fascination with the guitar. Gary has performed extensively with a variety of acts in New England and New York. As a member of BedRock, he continues his quest to perform and recreate some of the best Rock music on the planet! He is an alumnus of The Berklee College of Music, The American Institute of Guitar as a private student of Alex Skolnick, and The National Guitar Workshop. "I am proud and honored to be a member of BedRock. So excited I nearly drove of the road when I got the news! (Don't talk or text while driving kids!) But when your caller ID shows 'Pete - BedRock' calling, you pick up! I'm looking forward to rocking out with the band for the fans, our friends, and families. See ya soon and Rock On!"

Tyler was born and raised in Jacksonville, FL, and has been playing guitar for 14 years. He's mainly a heavy metal guitarist, but he can pretty much play anything. Tyler has been in several bands over the years, but none lasted that long, which worked out great for BedRock! :-D We're very lucky to have Tyler and his amazing guitar talents in the band. 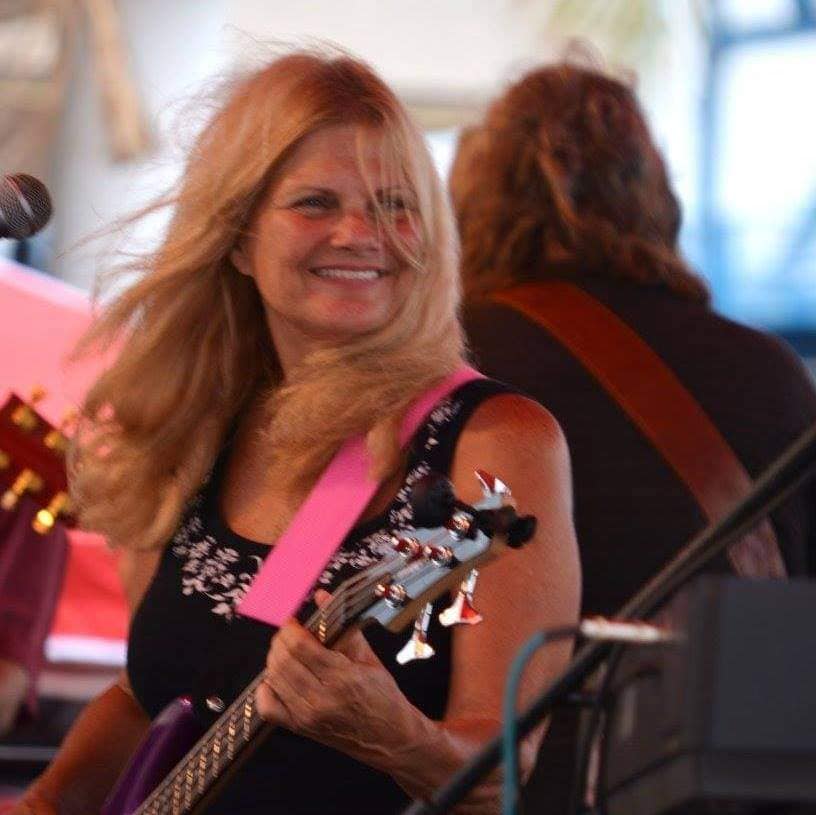 This is Judith Cooper. Here is a brief bio: My experience includes multiple bands, duos, trios and solo acts. I have played most popular songs in many genres and also have played and recorded for original bands. I have a background in music theory (6 years of piano and church choirs) and I also play by ear. I play bass, rhythm guitar and light leads (no shredding). I sing awesome harmonies and I sing Lead for some songs as well. One of my most important assets is that I can follow on bass, guitar and even vocal backing with almost anyone on the spot....even if I don’t know the song😉 I’m capable of sitting in with most music ensembles. My solo performances are more coffee house/happy hour songs of soft rock mostly from the 60’s until current. I play a few dance songs, but prefer embellishment with a percussionist, bass, second guitarist, supportive instrument (second guitar, violin, sax, flute) to add energy and variety, if a more energetic performance is desired. I live in Fenwick Island, DE and Jacksonville Beach, FL and play almost continually on various projects and freelance work, including churches. I have all of my own equipment..

Judith uses: Judith plays short scale basses (Gibson or Ibanez) through a stack: Marcbass 121P bass combo amp and an Acoustic Cabinet with a 15 inch bass speaker and a horn. 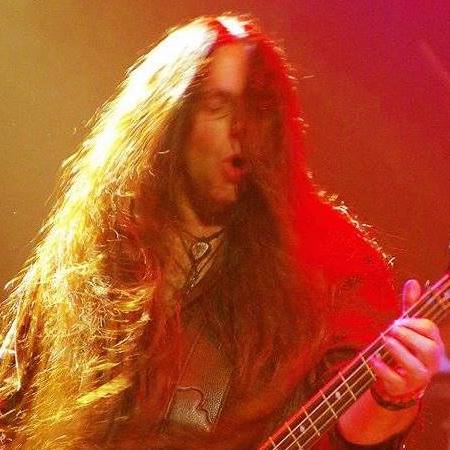 RIP Pete (4/17/67 - 9/1/2021) Although gone, he will never be forgotten and will remain an honorary BedRock member forever. Pete (full name Peter John Rivera) is the founding member of BedRock. He's toured up and down the East Coast and Southern states in the 80's and 90's with various bands such as Baby X, Thunder Alley, Wallstreet, and the Guns and Roses Tribute band Paradise City, and has opened up for such national acts as Warrant, Dream So Real, Night Ranger, and Sam Kinison who also sat in with his band. Pete stayed the longest in an Atlanta-based band called The Cosmic Gypsies (for over 15 years). In 2010, he left The Cosmic Gypsies to move to New York. Once in NY, Pete took a 3-year hiatus. He was extremely burned out and tired from gigging 2-3 nights a week, every week for years and the Rock & Roll lifestyle was taking a toll on his health. The time off was just what he needed. Once he was rested up and ready to start playing again, he had the drive and ambition to build BedRock, a popular, high-energy band that puts on an awesome stage show and kicks butt all over the Tri-State area!